On a lovely overcast day in June, attendees gathered at the Andaz on Liverpool Street to attend the very first Acquia Engage Europe.

(With so many wonderful sessions, speakers, and networking opportunities, for this post, we’ll be focusing on the general sessions.) 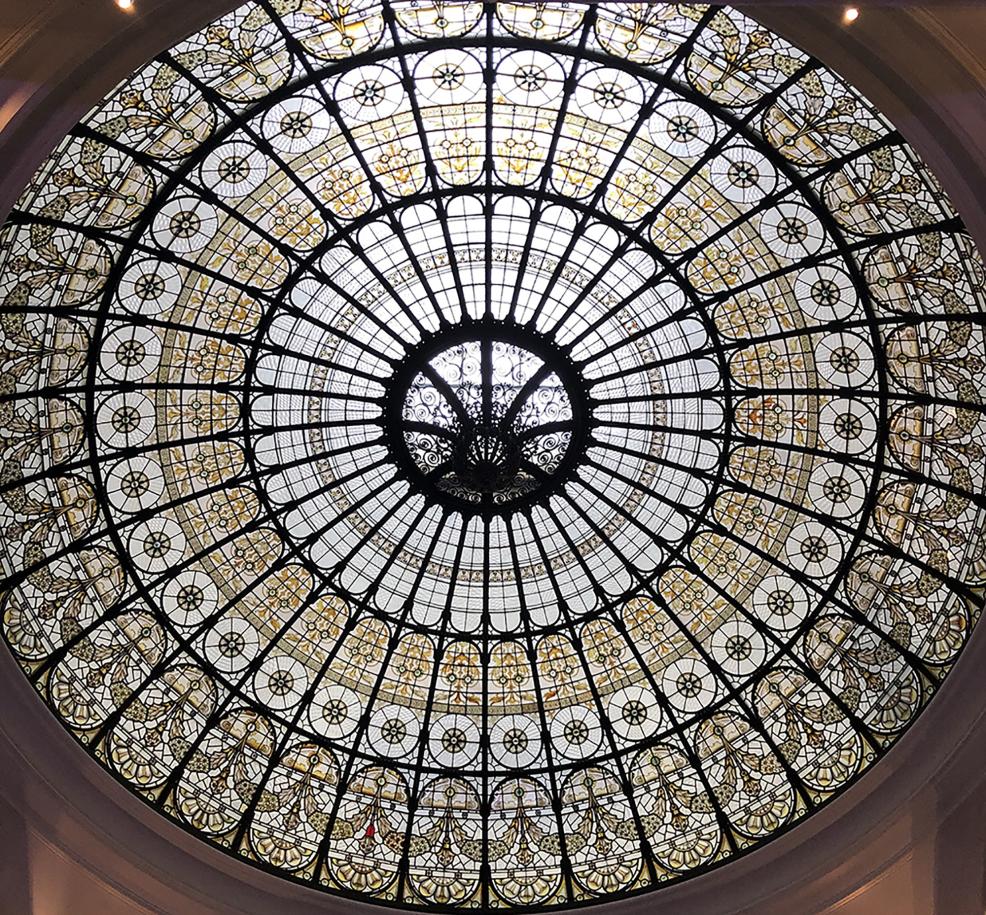 The building itself had an interesting story, shared by Steve Williamson, Acquia’s senior vice president for EMEA. The Andaz was built on the site of England’s first hospital for the mentally ill – the Bethlem Royal Hospital, which opened in 1247 and was later just referred to as “Bedlam.”

The 1901 ballroom, where the general sessions were held, survived World War II, even the lovely stained-glass dome (except for one single piece, now replaced by a red piece of glass).

But enough with the history lesson, let’s talk about how we made a little bit of history ourselves.

We kicked off the day in beneath the aforementioned dome, as Steve and Sylvia Jensen, Acquia’s vice president of marketing for EMEA, set the stage for the day. The theme of the conference was “Transform the Journey.”

Next up, Acquia CEO Michael Sullivan gave a fresh introduction to Acquia. Our company’s value lies not just in our enterprise-ready platform, but in our role in the Drupal community, how happy our customers are, and in the people who show up to work every day and make things happen.

What does it take to be a digital winner? It’s no longer enough to just have a good website. If you’re in marketing, there’s a lot of pressure for you to keep up with all the new technology constantly entering the the MarTech space. The infamous Marketing Technology Landscape Supergraphic is now up to 6,000-plus logos.

There’s more fragmentation than ever. This obviously leads to new opportunities, but also new pressure points. The companies that can find the balance will lead the pack. Acquia is designed to help our customers achieve this by embracing an open approach to technology vs. a proprietary suite of pre-selected technologies. It’s all about freedom (how American).

Delivering Digital in the Experience Economy

Next up, Acquia partner and Engage sponsor Capgemini took the stage, as Toby Merchant, head of digital experience, and Tom Phethean, head of web platforms, spoke about what it means to deliver in the experience economy. Their quip about coffee houses with exposed wood and bearded baristas really struck a chord with our audience.

So how do you get started in the experience economy? Capgemini recommends listening to your customers and use technology to solve their problems. Start small and expand, but always plan for the future.

The topics covered what’s top of mind for digital over the next two to three years, customer journeys, the importance of open source, the pace of change, and ended with what technology each of the panelists really like and, of course, dislike.

After lunch, Dries Buytaert, Acquia’s CTO and Drupal founder and project lead, spoke about the company’s product strategy and where it was headed. He highlighted three top priorities: 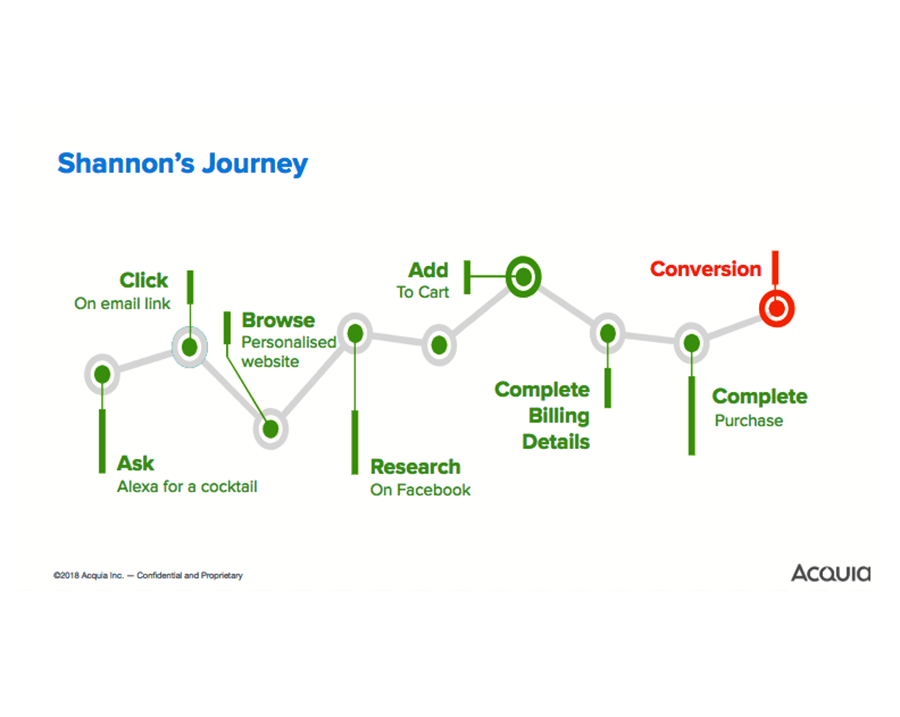 What would an Acquia Engage be without a demo? Shannon Holmes and Simon Chapman were more than happy to walk the audience through a live customer journey.

“Most customer journeys don’t start with a website,” Shannon told the packed ballroom as they went on a whiskey buying journey together that showed (via things like Alexa and personalized content recommendations) different ways you can proactively engage with customers.

Don’t Stand for Bland: Why Creative Confidence is Essential in a Landscape of Same

Closing out the second round of general sessions was our partner and sponsor Mirum. Conrad Rasmussen, head of creative for Mirum London, asked the audience five simple questions over the course of his presentation:

We’re in the “moody teenage stage of the internet; nothing’s ever good enough.” If we think of experience as expectation, even when customer expectations seem unfair, we still need to meet them. The way to do this is with creativity.

As an example, look at our relationship with our mobile phones. It’s something we loved that quickly moved to a commodity, leading to mediocrity. Conrad illustrated this by how all our phones (and their marketing) pretty much look the same now. If we’re all doing the same thing, you can’t tell the difference between brands. You can get in a rut of best practice.

Creativity is a part we can keep away from the machines. Creativity is a behavior and your team needs to be set up for it. People think opening the door to the office is enough (it’s not). The pursuit of “the new” has many dead ends. The best creative ideas always seem obvious after the fact.

Commercialmotor.com is a news and classifieds website published by DDV Media, where you can apparently buy a firetruck (among other vehicles).

Their website was built on a proprietary classifieds platform owned by a supplier that had changed its strategic focus and stopped fully supporting the platform. Meanwhile, the site’s editorial content was managed using a separate niche CMS.

Inviqa partnered with Acquia to combine two distinct RTM websites – commercialmotor.com and vanadvisor.com – in one Acquia Cloud subscription, enabling the client to manage both from the same backend system.

The Future Is Better Than We Think

Closing out the day was a wonderful keynote from Gerd Leonhard. A former musician and producer, Gerd was right in the middle of the music industry when it went through the its major digital transition. But in Gerd’s opinion, this was great. As Bowie said, music should be like water, and now for 10 quid, you can have thousands of songs instead of just 10-12 on a CD for the same price.

“I don’t predict the future, I observe the future. Now the future is here,” he said.

We see so many worrying news stories and the future seems scary. Artificial intelligence is seen as a threat, the environment is in peril, we’re an aging population still dealing with inequality, but there are still so many amazing things happening. It’s just overwhelming when it’s all happening at the same time

Gerd predicts that within the next 20 years we will address food shortage, stop or even reverse global warming, prevent or slow diseases, and so much more.

We just have to agree about what we want and use technology for positive effect. Things like AI and genetic engineering can be as powerful as nuclear weapons so we have to use this change for good.

Speaking of change, humanity will change more in the next 20 years than we did in the last 300 years. Technology is changing us. It’s no longer if we can do something, but why.

And that’s a wrap on the general sessions at Acquia Engage Europe. We’ll be back soon to talk about the Build, Share, and Inspire tracks.
If you weren’t able to attend, we’ll be holding our next Acquia Engage in Austin, Texas, this November. Registration is now open.