Breaking Down the CMS Market: Drupal’s Strengths and Weaknesses

Our UX team conducted research to see how Drupal stacks up to other CMSs in terms of user experience.
Posted by Brian Prue on 11/01/2019
Image

Acquia is built upon and optimized for Drupal, the open source web content management system powering more than 1,000,000 websites. While we know already that Drupal is the most widely used CMS among global enterprises, governments, higher ed institutions and non-profit organizations, what we did not yet know was how different user groups perceive Drupal’s strengths and weaknesses, especially compared to other solutions in the market. For this reason, Acquia’s User Experience (UX) Research team surveyed more than 460 respondents and conducted over 22 hours of interviews to better understand how Drupal stacks up to other CMSs in terms of user experience. As Dries Buytaert, founder of both Drupal and Acquia, shared this week during his DrupalCon Amsterdam Driesnote, users’ opinions of Drupal improve with experience, but the opposite is true with competing CMSs. Here, I will dive a little deeper into why this is and other key takeaways from our research.

Drupal tracks in line with other enterprise web content management systems, like Adobe Experience Manager (AEM) or Sitecore, when it comes to learnability (i.e., how easily a userbase feels they can learn to use all the functions of a system). However, lower-market products like Wix and Squarespace score highest in terms of ease of learning. When it comes to usability, Drupal is easier to use than other enterprise systems, but harder to use than the lower-market products. This indicates to us that there is a bit of a learning curve with all enterprise WCMs, but once you’re over that hump with Drupal, it is much easier to apply that knowledge to accomplish one’s day-to-day work. 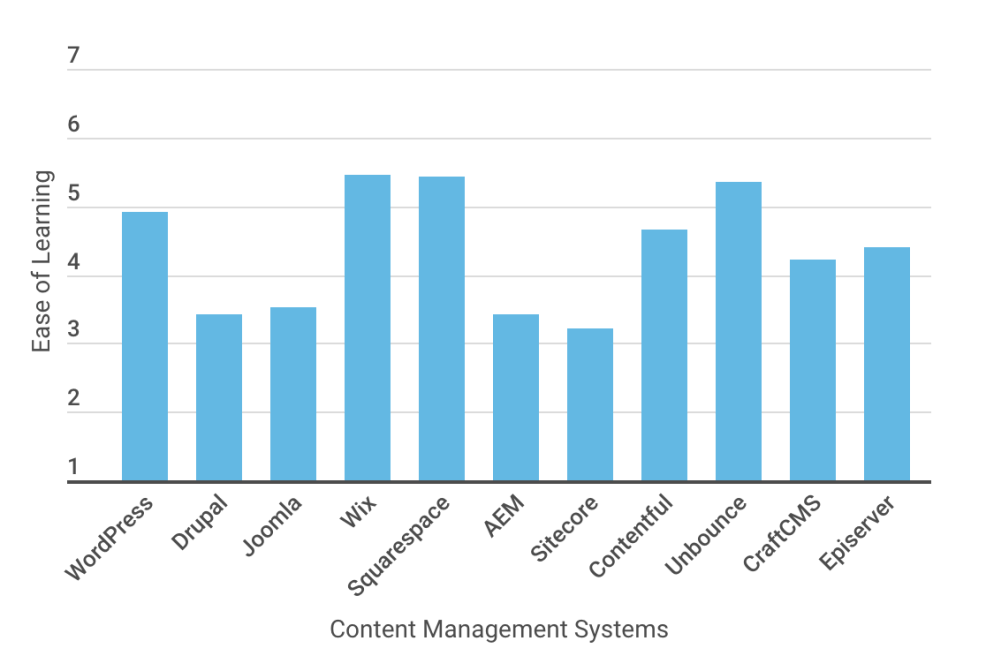 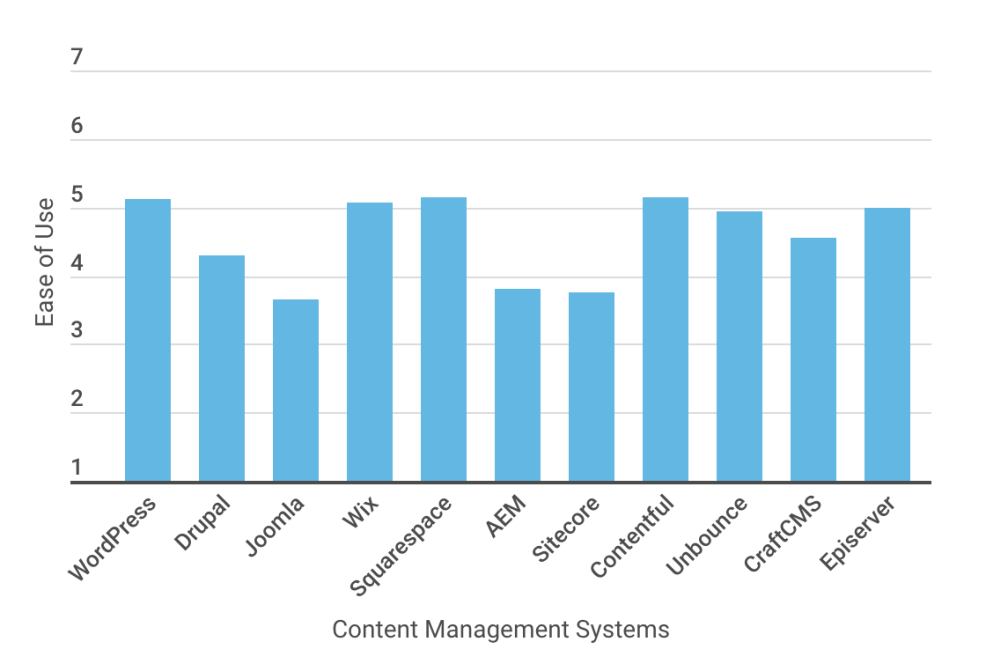 Our research found that other enterprise systems require higher levels of effort for content creation than Drupal, while Wix and other lower-market systems require the least effort. However, despite the moderate amount of effort needed to create content with Drupal, it actually ranked the highest in terms of satisfaction for content creation. Users reported being able to create “exactly what they envisioned” using Drupal; noting that while lower-market systems were easier to use, this came at a cost to design flexibility. So while it may take a little more work to create content using Drupal, the end result was perceived to be worth it and Drupal users are the most satisfied -- especially compared to those using systems that are low-effort but only moderately satisfying (e.g., easy to select a template that looks “good enough” rather than “perfect”).

Modern vs. Premium vs. Empowering vs. Clear

Drupal had the highest net promoter score (NPS) out of all CMSs evaluated. Initially the research team was concerned this was due to sampling bias (e.g., Were Drupalists overly negative in rating other CMSs?), but the NPS scoring pattern remained consistent when removing those with moderate or extensive Drupal experience from the sample. Beyond asking how likely respondents are to recommend a CMS, we also asked their perception of each solution in terms of how modern, premium, empowering and clear it is. Drupal ranked as one of the most premium and most empowering systems, which is no surprise given how many ambitious brands across a host of industries are using it in various, creative ways to support all their needs. 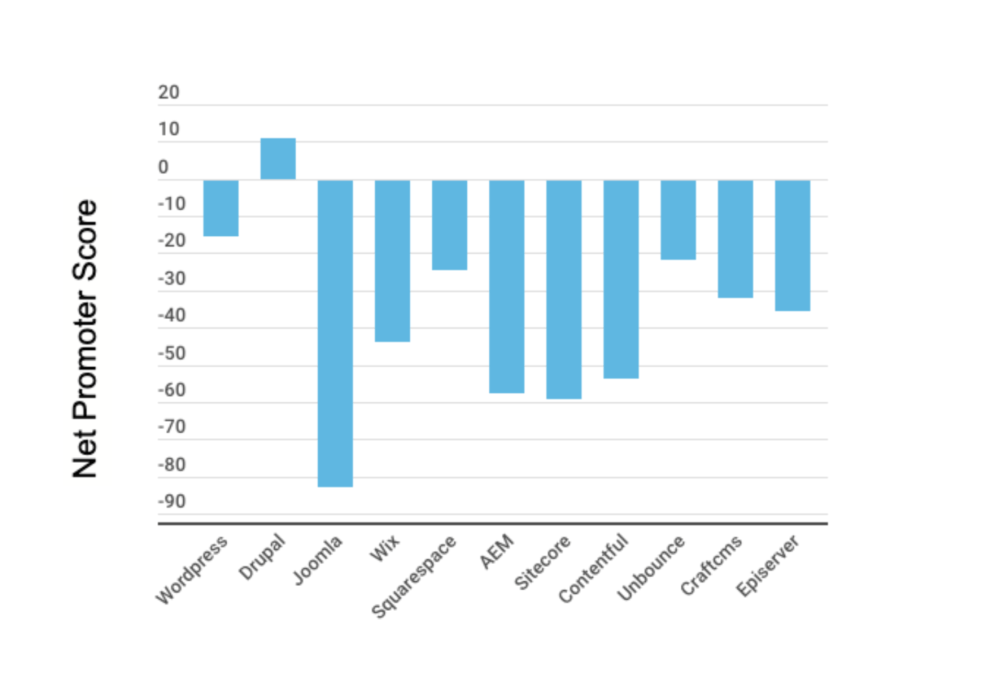 Although Drupal wasn’t considered one of the most modern CMSs, respondents do view it as modern. In fact, Drupal ranked higher than AEM, Sitecore, Wix and Wordpress in terms of modernity. Another area that Drupal did not do well in was clarity, where none of the enterprise WCMs scored highly, which makes sense given the lower learnability scores mentioned earlier. While Drupal was rated neither clear nor confusing, Joomla, AEM and Sitecore all ranked negatively for clarity.

Since we saw that Drupal has a steeper learning curve than other CMSs, we were interested in whether perceptions change as users gain familiarity and experience with Drupal. What we found was that across all categories (modern, premium, empowering, clear and overall NPS), Drupal scored higher the more experienced a user was with Drupal. In fact, we saw a 60 point NPS increase between Drupal users with moderate experience and those with extensive experience. What this tells us is that the more experienced a user is with Drupal, the more satisfied they are and therefore, the more likely they are to recommend it to others.

So what do people look for when choosing a CMS? Our survey respondents’ top answers were security, easy content creation, performance and technical considerations. While Drupal’s strengths include high user empowerment, high satisfaction among the extensively experienced and high satisfaction for content creation, Drupal does have some perceived weaknesses, namely that it is difficult to learn, is poorly perceived by those with little experience, lacks clarity and requires high effort for content creation. Because Drupal is hard for beginners to use, it’s not growing as fast as it could.

So what do we do about this? The Drupal community needs to prioritize the beginner experience. Acquia is committed to making Drupal the most enterprise-ready CMS for any needs our customers have, so our Drupal Acceleration Team is dedicated to taking these learnings and the feedback of the larger Drupal community, including our customers and partners, and acting on it to make Drupal better for everyone.

CMS Lessons from “Flip or Flop”

Drupal Versus WordPress: A CMS Comparison for Insurance Leaders