Sealed Air was undergoing a fundamental redesign of its internet and intranet IT platform.

The Sealed Air team needed technology that was fast enough to match the team’s ambitious schedule. Based on decades of collective experience, they decided that only an open source environment could offer such a capability.

A Fortune 500 company with sales of over $7.8 billion in 2014, Sealed Air has “bubbled up” over the past 55 years from the introduction of its iconic product, Bubble Wrap, to become a purveyor of premium packaging, cushioning, cleaning, and hygiene brands around the globe.

When Executive Director of Digital Marketing, Benjamin Pollack, first walked in the door at Sealed Air, he knew he was in for a bumpy ride. The company was undergoing a fundamental re-design of its internet and intranet IT platform. Before the project team reached a point of no return, Pollack made a decision to “push the nuclear button” and clear the decks for a whole new approach. He assembled an internal team headed by Keyvan Eslami, Executive Director of IS Innovation, and Kiran Vedak, VP of IS Innovation, both denizens of the Drupal movement and consummate IT architects.

Sealed Air’s previous content management system (CMS) provider lacked the ability to scale to an enterprise level that would accommodate everything on the development agenda. Thus, applications would be limited by a proprietary architecture ill suited to the kind of rapid application development that Sealed Air needed to accomplish its current IT objectives and future application needs.

The major issue, however, was speed. The team needed a process that was fast enough to match the team’s ambitious schedule. Based on decades of collective experience, they decided that only an open source environment could offer such a capability.Drupal and Acquia Cloud would provide the ideal architecture, based on its combination of an agile CMS and a scalable application development framework.

Acquia Cloud, which provides full-service coverage at all layers of the Sealed Air infrastructure, was the key to vaulting the system up to the enterprise level. In a significant departure from traditional hosting, the monitoring function determines resource allocations and support requirements, which goes far beyond just putting applications on a server and maintaining an ability to see whether they are running or not.

“Underscoring the fundamentals such as disaster recovery, monitoring, security, and risk management,” said Benjamin Pollack, “Acquia delivers a full spectrum of technical and operational support, giving us an enterprise-class environment in which to operate.” 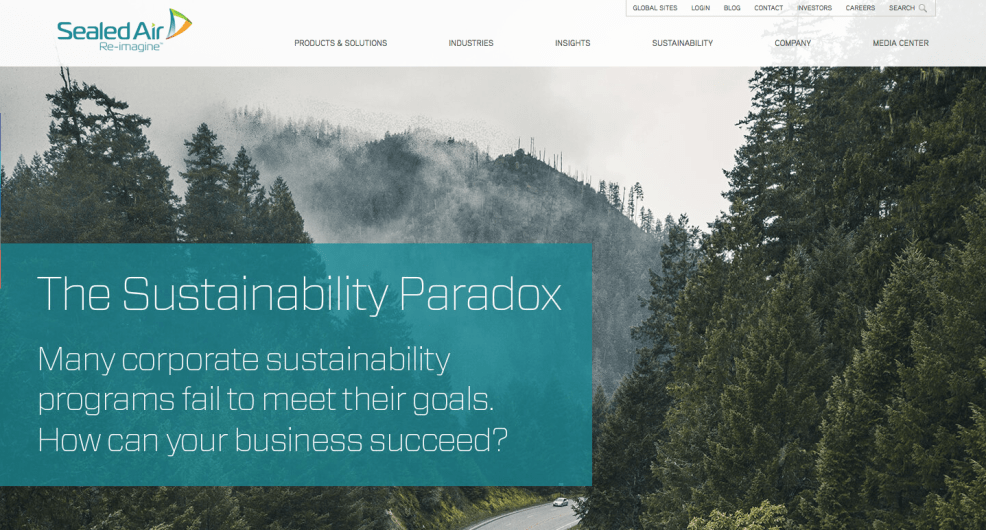 With this new IT platform, Sealed Air can support whatever applications are needed as well as an infrastructure with an almost infinite capacity to scale up to meet ever-rising demand. By leveraging developer talent throughout the Drupal community, Sealed Air was able to unlock an a managed crowdsourcing approach, enabling Drupal developers around the world to take on work that could not be completed in house.

“For CIOs concerned about open source, it’s the way that Acquia takes Drupal to the enterprise level that makes all the difference,” Eslami says. “And in a time when the web is rapidly becoming the center of the business universe, that’s exactly what we need.”

In fact, tapping into the 20,000-strong Drupal development community circumvented almost 80 percent of the development issues the team faced because developers in that community had already solved them. Therefore, most of the work could take the form of customization. Utilizing a rich portfolio of community-contributed modules, not only ensures that almost any application can be created, but it can be done quicker and easier than would otherwise be possible using a proprietary system.

Finally, one most important aspects of this approach has been the ability to quickly and efficiently handle the development of customer marketing sites. Drupal currently offers over 30,000 modules that can deliver up to 60 percent of the functionality needed to create those sites. This allows differentiation to become the focus of the customized work that remains. This includes facilitating easy localization for international markets on a global plane. Closer to home, it facilitated the creation of repositories for the stockpiling of sales brochures, data sheets, and other print marketing materials.

With Acquia, Sealed Air is now able to support an intranet infrastructure accommodating extensive business process growth; an integrated, contextually-based Internet presence offering a highly-immersive consumer experience; and a new brand messaging paradigm based on the concept of “imagining a world where less is greater than more.” Running both Internet and intranet portions of the project in parallel, this small, agile development crew has built a fully integrated Internet and intranet environment capable of extending into an unlimited future.

Finally, Acquia helped Sealed Air deliver on its mission to increase speed-to-market. Originally, the entire Sealed Air project was predicated on a two- year timeframe. But the initial phase of the platform redesign was delivered in approximately eight weeks, at 50 percent of the cost originally projected, primarily because the open source Drupal platform was essentially free.