Rice University’s students, staff, alumni, and donors needed a website where they could get updated information, perform transactions and actively communicate with University departments.

A legacy CMS with spotty access provisioning kept development from being able to easily assist with site problems. A disjointed codebase and sporadic theming created a less-than-ideal experience for visitors.

With 320+ sites now on Site Factory, visitors enjoy an enhanced user experience and the development team is freed up for more strategic tasks.

Opened in 1912, Rice University is a private research university in Houston, Texas. With eleven residential colleges and eight schools of academic study, nearly 4,000 undergraduate and 3,000 graduate students are able to select from more than fifty majors and twenty-five minors. The University employs 680 full-time academic staff and more than 2,150 administrative staff.

Acting as an online extension of its campus, the Rice University website provides a variety of information and services for the students, parents, faculty, alumni and donors who access it. From finding information about upcoming classes to connecting with fellow Owls at Rice Alumni events, users rely on the website as a way to stay informed, perform transactions and actively communicate with University departments. But the University’s previous web platform was difficult for content authors to use, and the lack of a unified codebase meant that each of the University’s nearly 300 sites had to be maintained separately.

Ektron, Rice University’s previous CMS, was not only receiving complaints from clients but also wasn’t a favorite among developers; if users had a site problem, one developer may be able to access the system to assist, but spotty access provisioning meant another would be unable. Sporadic theming, responsiveness and branding led to an overall disjointed experience for content authors and site visitors. The University’s CIO and tech team realized the need to create a streamlined online experience that simultaneously provided unified access for its development team.

Having successfully used Drupal and Acquia Cloud Platform in their previous university positions, Rice University’s new CIO opted to transition from Ektron to what was then Acquia’s latest product, Site Factory. And ultimately, the switch was easy, as existing staff came online within the platform and honed their Drupal skills by working through an initial 17 site conversions. 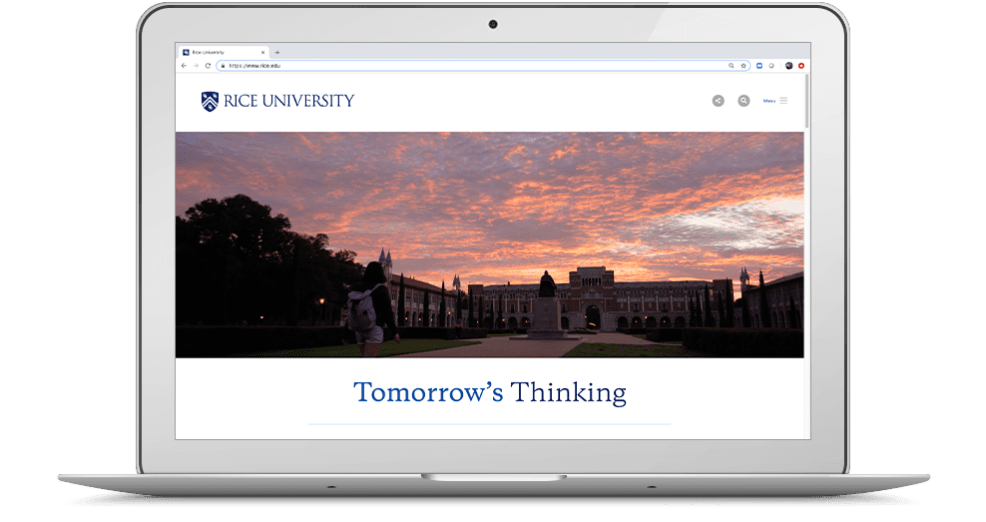 → When storm clouds rolled in to Houston, Rice turned to Acquia’s Cloud.

When the deadly Hurricane Harvey slammed Houston for over two weeks in 2017, it was critical for Rice to maintain reliable, effective communication with their community, not to mention with nervous parents and students. By having a monolithic theme out, Rice could use Acquia Site Factory to instantly broadcast important emergency and safety information across 280 sites.

Rice also used the Cloud to quickly collect information about how the community was faring. They efficiently set up and distributed web forms that could survey where people lived, how hard they were hit, and what they needed. Rice used this accurate, real time information to intelligently mobilize students as a volunteer hurricane response team, and continue to push helpful information to storm victims in need.

With 320+ sites now on Acquia Site Factory, Rice University has fully transitioned from Ektron and is preparing for a move to Drupal 8 Site Factory in the near future. Visitors enjoy a better user experience across browsers and devices, and the ease of edits frees up the development team to focus on more strategic tasks.

The move to Acquia was initiated by the Office of Information Technology (OIT), who handled the implementation of Acquia’s services. OIT collaborated with the Office of Public Affairs to manage site development, with Public Affairs responsible for the brand and design and OIT handling the platform, user training, and support. Brand standards and accessibility are now more consistent, platform maintenance is less cumbersome and the University development team is able to quickly respond to microsite requests.