Princeton’s IT department was responsible for maintaining the university’s CMS platform, but with so many different stakeholders and goals, their CMS was falling short of their modern website’s needs.

Princeton’s previous CMS was obscure and located in Sweden, so it was difficult finding developers and getting timely support. Flexibility and customization were also lacking, causing Princeton to search out an alternative, easier-to-use CMS.

Princeton selected Drupal because it combined open source code with expert community support. They tapped Acquia for a training jump start and architecture plan. Most Princeton departments and staff are now able to self-service for their unique website needs.

Founded in 1746, Princeton University is the fourth-oldest institution of higher education in the nation and one of the nine colonial colleges chartered before the American Revolution. Considered one of the most prestigious universities in America, Princeton has been consistently ranked first or second among national universities by U.S. News & World Report from 2001 to 2018.

Princeton’s IT department was responsible for maintaining the CMS platform that served as the foundation for the university’s entire web presence, opting for a lesser known Swedish CMS. But with so many different stakeholders, including professors, departments and institutions within the university – each with differing needs – their CMS was falling short of their modern website’s needs.

Princeton’s previous CMS was so obscure, it was difficult finding developers who knew how to work on it, making changes and updates nearly impossible. Additionally, because the CMS creators were located in Sweden, timely communication was an issue. Other than emergencies, there was no such thing as getting a quick answer to a question or a fast resolution to a problem due to the different time zones. Beyond issues with support, flexibility and customization were lacking, causing Princeton to search out an alternative CMS that would provide a more tailored solution. 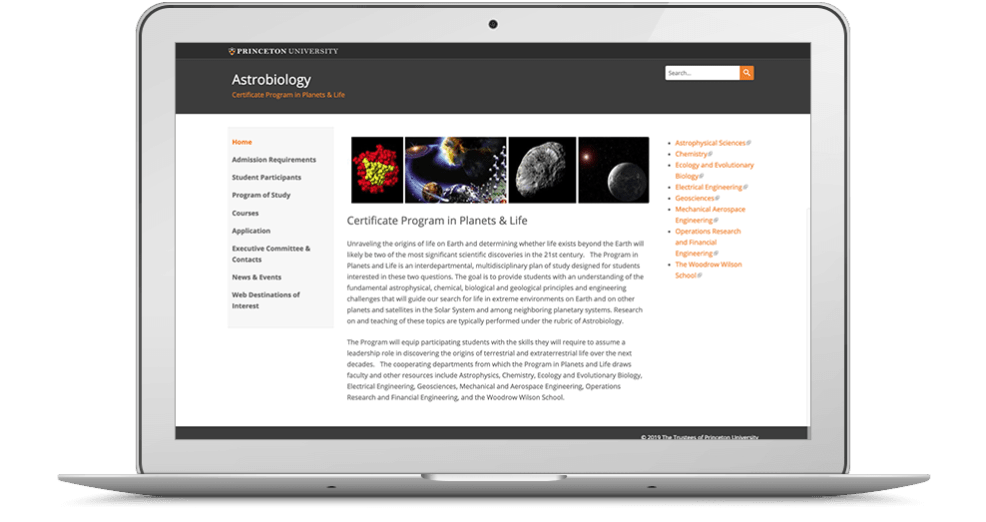 Princeton considered a variety of solutions, including WordPress and Joomla, and ultimately selected Drupal because it combined the best of both worlds: open source code along with expert community support. The university tapped Acquia for a training jump start and architecture plan. From there they partnered with a local Acquia-endorsed vendor to implement and configure a Drupal 7 multisite installation using Panopoly that allowed departments and individuals to run beautiful, completely functional websites without the need for any technical knowledge.

Staff at Princeton are able to self-service for their website needs; they simply pick a theme and use a drag-and-drop layout to create their own website, creating a win-win situation for the university’s faculty, staff (including IT staff) and web visitors. For departments and institutions that may have greater needs, the IT departments offer custom coded sites, depending on the requirements.

Since moving to Drupal, Princeton now has 287 live sites. Website owners report that the Drupal CMS is much “easier to use” and the IT department is now able to focus its efforts on enhancements; developing and deploying new feature releases every month in response to user feedback. Web accessibility has improved exponentially, as has the level of support and communication with the CMS developers. Princeton’s next steps include transitioning 41 custom coded Drupal 7 sites to the central platform in the near future to achieve greater standardization and take advantage of the enhanced features and functionality.