Leaders in driving climate action, Climate Group wanted to streamline their digital footprint under refreshed branding to give a clear sense of their strategic direction.

Climate Group wanted to bring their three websites together under their new brand identity such that it reflected their strategic direction, allowed for cross-pollination and supported their core mission to accelerate climate change. A secondary goal was to reduce emissions.

Since Manifesto consolidated the Climate Group’s separate websites into one Drupal 9 multisite instance on Acquia Cloud Platform, the organization has seen the following results: 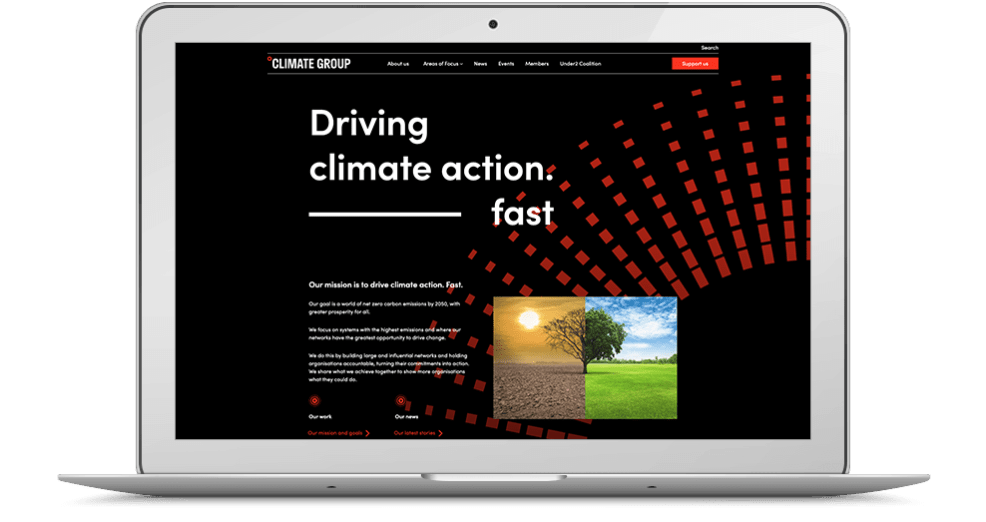 Climate Group is an international non-profit organization. Its mission is to accelerate climate action, the end goal being a world of net-zero carbon emissions by 2050, with greater prosperity for all. The organization works across business and government sectors to bring change to international markets and policies.

Climate Group had been operating three separate websites and wanted to improve their user engagement and improve cross-pollination across their programs. However, they were concerned that increased site traffic and conversions would tax their site’s ability to perform without site crashes or downtime. They needed a solution that would simultaneously streamline code and empower their editorial team.

In addition to bringing together their three sites under one brand identity, Climate Group also wanted to serve their multi-national audience more effectively, but poor load times for regions outside the U.S. negatively affected engagement, disappointing site visitors. Climate Group was concerned that as the site grew, so too would its issues.

As an organization focused on driving climate action, Climate Group also wanted to be conscious of limiting their environmental impact. Previously, their RE100 site accounted for nearly three-quarters of their total emissions. With the knowledge that the digital industry is responsible for at least 1.4% of global emissions, Climate Group was committed to changing their digital footprint.

Manifesto adopted a strict pattern library approach that kept the code base streamlined. They also kept emissions down by introducing file-type requirements and optimization rules around images and icons, replacing auto-playing videos with static images — only expending energy if users clicked to play a video — stripping down third-party plug-ins and even dimming the website’s overall color scheme.

Ultimately, Manifesto combined the Climate Group’s two Drupal 7 sites and one other site built with a bespoke CMS into one Drupal 9 multisite instance on Acquia Cloud Platform. This gave the Climate Group the functionality necessary to build, operate and scale with ease — and all at a lower long-term cost of ownership than if the Climate Group had taken a DIY approach.

Since consolidating the separate websites into one Drupal 9 multisite instance on Acquia Cloud Platform, the Climate Group has seen the following results: