increase in time on page

Anthony Nolan’s tech team needed to ensure their site’s infrastructure was fit for the future, while simultaneously increasing conversions and improving the user experience.

The new site’s engagement metrics show that Anthony Nolan’s changes are having the desired impact:

Anthony Nolan saves the lives of people with blood cancer and blood disorders. It was founded in 1974 as the world’s first stem cell register, motivated by a mother’s determination to save her son, Anthony. By recruiting potential donors, funding ground-breaking research and providing the best post-transplant care from specialist clinical nurses, Anthony Nolan saves and improves the lives of everyone who needs a stem cell transplant.

Like many charity organizations, Anthony Nolan saw monetary donations significantly drop due to the COVID-19 pandemic. Though 1,270 transplants took place during 2020, nonprofit leaders knew that to continue supporting their mission, they needed to focus on increasing fundraising efforts.

The charity wanted to use its online presence to entice people to become donors — by joining the stem cell registry, making a financial donation or both. But the site’s existing technology was outdated. Additionally, the previous site had unresolved speed issues, and conversion rates hinted that there was room for improvement in the user experience, especially among mobile users. Anthony Nolan’s tech team was focused on modernizing systems and platforms to ensure their infrastructure was fit for the future.

Anthony Nolan had previously used Drupal 7 for its website, but when its tech team decided to upgrade, they considered other solutions. Because of their limited in-house development team and tight tech budgets, they chose to build the new site on Drupal 9, hosted on Acquia Cloud Platform. Anthony Nolan was able to bypass Drupal 8 and move straight to Drupal 9 when starting their build because the Acquia Cloud Platform could support Drupal 9 right out of the box.

The fact that Acquia was deeply connected to the Drupal community and offered a platform that was supported and backed by Drupal developers was important to Anthony Nolan. Because many of the customizations and features they wanted for their site were already available as Drupal modules, Anthony Nolan was able to launch the new site in a timely, cost-effective manner.

Working with digital agency Manifesto, the teams created the initial design and UX. Then, Anthony Nolan’s tech team relied heavily on the Drupal community and Acquia professional services for support as they tackled the build in-house. This allowed Anthony Nolan to focus on its main goal — improving conversions and engagement — rather than forcing them to build out custom functionality that already existed. 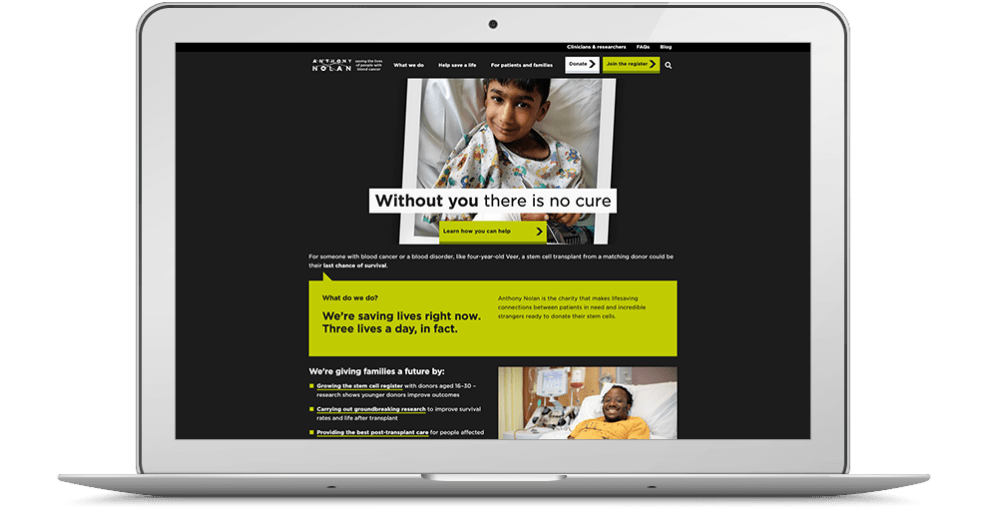 All told, the update project took just nine months thanks to the fast out-of-the-box experience. Engagement metrics show that the new site is having a positive impact on target audiences. Time on page has increased by 65%, conversion rates are up 4%, and the site’s overall bouncerate has decreased by 8%. With page load times down 19%, the site is now much faster and better optimized for its mobile-heavy audience. Additionally, Anthony Nolan’s tech team is now able to automate the website’s maintenance and security updates, saving significant time for their developers and reducing administrative costs. In the future, the team plans to explore adding personalization and decoupling the frontend, and thanks to Acquia Cloud Platform and Drupal, they will be well-equipped to do so.

Why Go it Alone? The Hidden Costs of DIY Drupal Hosting