Drupal 10 Release: What You Need to Know

Get up to speed on the most recent version of the open source software
Posted by Gábor Hojtsy on December 6, 2022

The long awaited Drupal 10 update is days away. Whether you’re a seasoned Drupalist or brand new to the Drupal world, we’re glad to run through what this update offers. We’re excited for the release for a bunch of reasons that we’ll dive into shortly, but, most importantly, we’re happy to keep contributing to and growing this community.

With one in eight enterprise websites running on Drupal, building on its capabilities is a must. The sites of organizations like Nasdaq, the U.S. Internal Revenue Service, IBM, and Pfizer depend on the software’s continued improvement. Already its ability to securely scale is a key trait that elevates it as the content management system of choice for ambitious organizations swinging for the digital experience fences — no matter the company’s size.

An open source project, Drupal regularly receives thousands of contributions to its development, ensuring its innovations remain one step ahead of R&D shops for closed system software. Luckily, this is the shiniest Drupal update yet, and there’s plenty to be excited about. Here’s what you can expect.

The old Bartik theme will be replaced by the sleek, modern Olivero theme. This theme is gorgeous right out of the box.

Named after Rachel Olivero (1982–2019), a Drupal contributor, head of the organizational technology group at the National Federation of the Blind, and lauded accessibility expert, the Olivero theme boasts accessibility features that ensure Drupal 10 works for everyone.

Claro is the modernized back end that will replace the 2009-designed Seven theme. A great deal of work went into color contrast and element unification in the various user interfaces of Drupal 10 core. Touch targets are bigger, and administrator tabs were moved based on user research and better accessibility. The look is fresh, making Drupal more inviting. In the past, the look didn’t match the underlying power of Drupal, making its infinitely flexible capabilities seem dated based on appearance alone. Claro gave it a refined look that invites people to discover Drupal’s power.

CKEditor 4 will reach its end of life in 2023, so we’re moving to CKEditor 5. On the front end, it’s a greatly refined content editing experience. For instance, you can now edit links and images in place versus having to open additional dialogue boxes.

Another CKEditor 5 update we’re excited about is improvements to copy-pasting from Word Documents or Google Docs into the content editor. It’ll remove markup copy-pasted from those programs.

For an extra fee, there’s CKEditor 5 Premium Features, a contributed project with real-time collaborative editing and commenting features available, as well as Word and PDF exports. Take it out for a spin; try a 30-day free trial.

A new object model, plugin, and configuration system enables these features. The Drupal community worked with CKSource to implement the upgrade, with developers from Acquia also contributing to the effort. At the start of the initiative, critical Drupal requirements like UI-based plugin configuration weren't possible nor was source editing supported. Now both are.

Drupal themes are not often created from scratch; instead, they’re built atop base themes. In Drupal 9 and before, this was supported with runtime inheritance where the base theme and the derived theme were both on the system. This approach was risky, however. If the base theme changed something in an update, the site's look or behavior could break.

With Starterkit in Drupal 10, you create a fork from a compatible theme and work on your copy from there. Whichever version you copied from is automatically retained. If there are updates to the theme you started from, it’s now up to you to review and apply those changes to your version, greatly improving its stability.

With these features on the horizon, you need to make sure certain elements are in place before you can work in Drupal 10. For example, Drupal 10 will:

These upgrades will improve the Drupal experience by enhancing support, boosting site performance, and providing a more modern UX for developers and non-technical users alike.

To focus Drupal 10 on the core experience, as well as to allow some modules and themes to be more freely improved by the community, the following components were moved from Drupal Core to contributed projects. They’ll still be available but will be maintained separately.

For those of you installing Drupal 10 for the first time, you're golden; for others, the new release may require a site migration or an upgrade. Below are tips and tools to help. But, first, here’s an idea of where to go based on where you’re starting from. 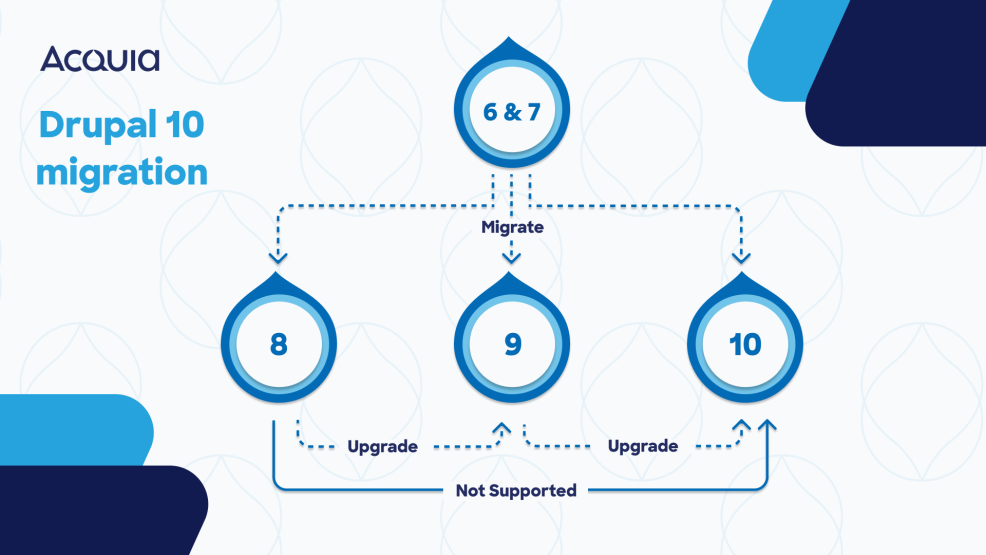 So, if you're upgrading from:

Acquia and Drupal 10: The perfect match

Acquia is the world’s foremost contributor to Drupal, and we’re here to help make your solution work as smoothly as possible. Whether you’re a Drupal noob or a seasoned veteran, Acquia’s got you covered. Learn more about the Acquia and Drupal 10 dynamic duo here.

What Is Headless Drupal?

How Developers Can Improve Deployment Workflows