Football Federation Australia (FFA) aims to be the most popular sporting code in Australia, and identified that a great digital experience is one of the best way to reach and convert wider audiences.

Websites for FFA and professional football clubs were maintained by a third party provider using outdated technology that was inflexible and hadn’t kept up with internet standards and trends. This provided a disjointed experience for fans visiting their websites. FFA decided to re-platform the sites to improve their fans’ experiences.

With Drupal and Acquia, FFA built the Football Network, giving them direct control over their users’ digital experience and can offer that flexibility to football clubs and others within the football community. This control enables the FFA to respond to marketing or commercial opportunities much more quickly, for example, through rapidly spinning up microsites.

Football Federation Australia (FFA) is the governing body of football (also known as soccer) in Australia and is a member of the international governing body for football, FIFA. It was established in 2004 and is responsible for launching Australia’s first ever fully professional national football league - the Hyundai A-League, the men’s league - as well as the Westfield W-League, the top-division women’s league.

FFA’s long-term vision is for football to be the largest and most popular sport in Australia; it is already Australia’s largest sport by participation with over 1.1m participants recorded in the Australian Sports Commission’s official AusPlay survey of July 2016 to June 2017. The challenge for the FFA continues to be how to convert the immense amount of people who participate in football into regular attendees, fans, and viewers, as well as improve the experience as a participant in football competitions.

Embracing digital technology is seen as a critical way to achieve the broader FFA goal of growing the fan connection. It was important for FFA to improve the experience for all participants by providing a seamless experience across web and apps.

Three years ago, FFA consulted widely across professional and community football to formulate a whole-of-sport digital strategy for the game.

FFA - like other governing bodies - already provided football clubs with digital platforms they could use to run their web presence. But until mid-2017, FFA’s entire digital function was outsourced to a third party provider. All FFA club sites were based on a single, inflexible template. The look-and-feel of the websites had not changed in over four-and-a-half years, leading to an increasingly outdated digital presence for the sport that was at odds with its ambitions.

By outsourcing its entire digital function, FFA wound up having limited control over the digital experience that it offered to football fans. This was happening at a time when digital services were identified as key to achieving its objectives of improving the fan experience.

Under the new whole-of-sport digital strategy, the decision was made to take back ownership of digital internally. FFA set up its own digital team and brought in several partners to help it achieve its goals in the space. These included:

FFA wanted to provide an updated user experience for fans as well as the flexibility for clubs to customize their sites based on their individual digital priorities. For example, if the club favored video content, this could be made more prominent, instead of being restricted to just one part of the club’s website. The governing body also needed underlying technology that could scale to the needs of the entire sport, while supporting a consistent, sustainable digital operating model.

Perhaps most importantly, the change needed to be delivered quickly. 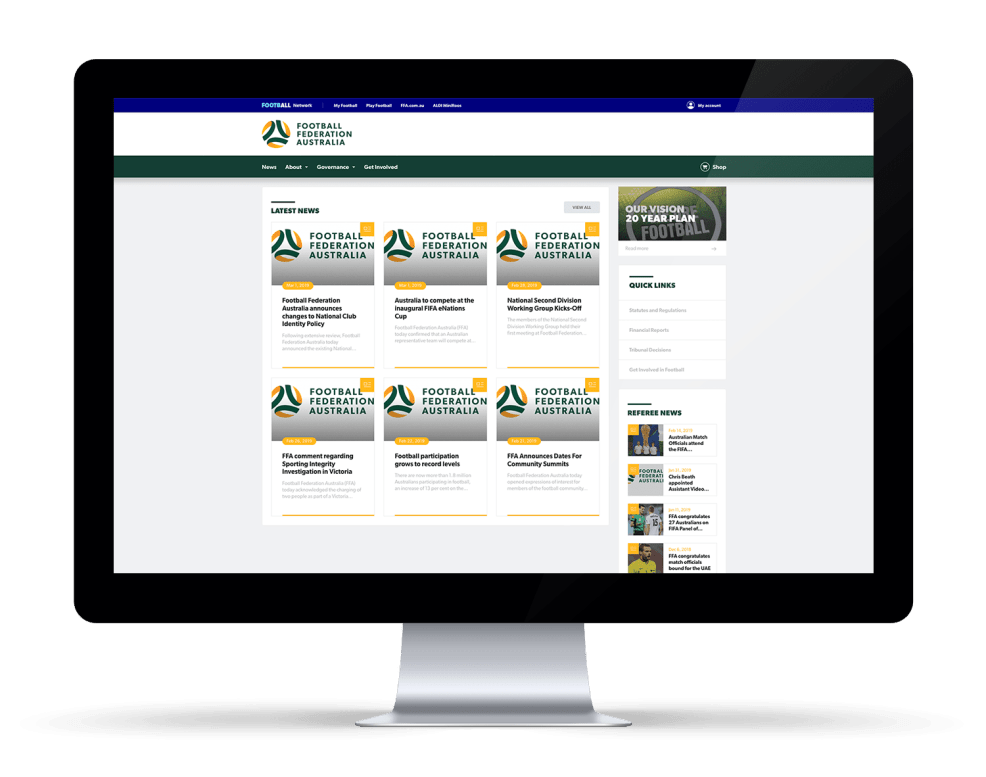 Out of necessity, FFA ran an “agile” process to select both the technology it would use and the partners that would help implement that technology.

When it put together its whole-of-sport digital strategy, FFA also came up with a list of “technology principles” - such as openness and flexibility - for its digital uplift. The governing body critiqued potential technologies against these principles and found that Drupal stacked up well.

Drupal also presented a cost-effective option for FFA. The sport itself had limited resources and could not afford to overcook its digital uplift by licensing a platform and capabilities it did not require. Drupal could deliver the same seamless user experiences that FFA wanted for both web and mobile application platforms based on its open API technology.

FFA decided to use Drupal via Acquia Cloud Platform. The build was handled by a blended team of the FFA and Acquia-recommended partners, Avanade’s Digital Innovation Studio and Codeware.  Leveraging experienced partners such as Avanade and Codeware was critical because FFA’s digital team had no prior Drupal experience or the scale to tackle a project of this size.  Without the help of Acquia, Avanade and Codeware, the new platform would not have been delivered in the short five-month period available.

Clubs were able to start with a blank canvas and re-arrange the “blocks” that make up their website designs as they saw fit. Websites now have a different look and feel to one another based on the individual club’s needs, though they share some common style elements as well as the underlying technology which is assisting them to reap the best value for their sponsors.

There is much more flexibility to spin up new microsites to respond to marketing or commercial opportunities. Previously, standing up a microsite required months of advance planning, whereas now the turnaround is less than a week. There is no longer a technical impediment to standing up new sites; most of the time is now spent getting the content right to launch quickly.

An example of an immediate need for a microsite was the trial of Jamaican sprinter Usain Bolt at the Central Coast Mariners A-League club. The trial generated fevered interest in the player, the club, and the sport. A dedicated microsite with “everything Bolt” was quickly spun up to take advantage of the increased interest.

FFA is now setting up more websites using the platform, including a site to support its bid to host the FIFA Women’s World Cup in 2023 and the addition of two state member Federations.

Ultimately, the objective now is to utilise the feature functionality of the Acquia Cloud Platform to support the generation of direct revenue streams and to bring on further partners and greater customization while striving all the time for an engaging fan, club, and sponsor experience.

The platform has proven to FFA that it can support the scale and speed of FFA’s digital functions now and into the future.