UVA’s students, staff, alumni, and patients needed a website where they could access up-to-date information, do business and actively communicate with University departments.

Drupal is now the University’s common standard; the web team has created hundreds of sites.

An iconic public institution of higher education, the University of Virginia (UVA) boasts nationally ranked schools and programs, a diverse and distinguished faculty and a major academic medical center. The community and culture of the University are enriched by active student self-governance, sustained commitment to the arts and a robust NCAA Division I Athletics program. In 2019, the University was ranked the No. 3 best public university by U.S. News & World Report; in fact, in the 20 years since U.S. News began ranking public universities as a separate category, UVA has ranked in the top three and continues to rank in the Top 30 among the best of all national universities, public and private.

Serving as a virtual extension of its campus, the UVA website provides a variety of information and services for the students, parents, faculty, alumni and patients who use it. From accessing the academic calendar to connecting with the career center, users count on the website to get information, conduct business and communicate directly with University departments. But the University’s previous web content management platform was a mishmash of disparate solutions, and the “Wild West” approach to web publishing meant that scalability was difficult at best.

Because UVA was powering its previous website via a number of standalone solutions, brand consistency suffered. Tasks like security patching were unnecessarily arduous, and content owners with varying levels of marketing and tech-savvy had to deal with cumbersome HTML and CSS coding before FTPing files to the webserver. When UVA’s web team projected growth from 15 to 100 sites within a year, it became clear to them that they needed to quickly transform their hosting solution and their content processes if they were going to be able to scale.

With many platforms in the mix, it was clear that a streamlined solution would help improve efficiency. Knowing that they would benefit from Acquia’s unparalleled support and flexibility, UVA’s web team ultimately chose to standardize on the Acquia Cloud Platform after considering other cloud-based Drupal hosting providers and Amazon Web Services (AWS). Acquia’s streamlined content creation and editing processes empowered content owners to produce content without requiring technical support, offering UVA stability and scalability within a predictable budget. 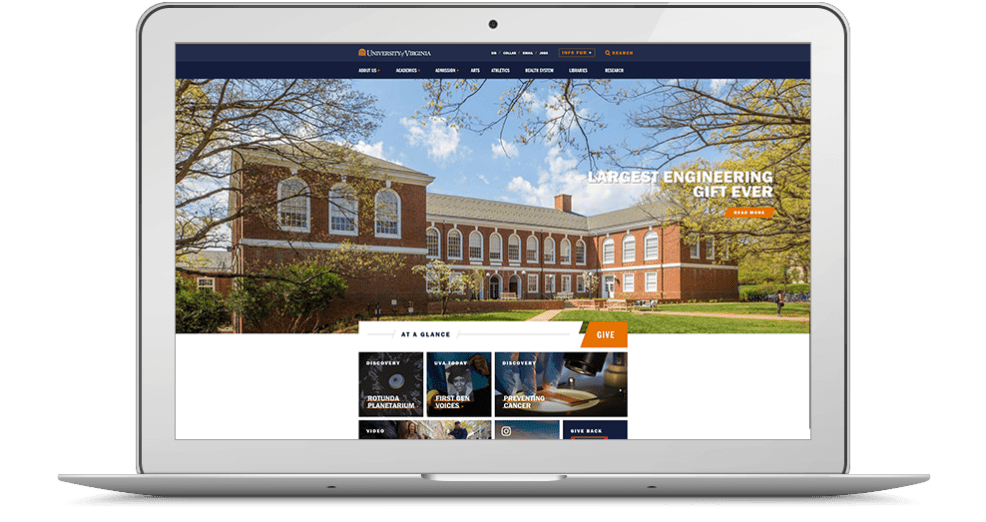 Drupal has become the common standard at UVA in a very organic way; it is one of the few unified solutions the University employs. And while the replatform is ongoing, the web team was able to move 15 initial sites to Acquia in a short six-week timeframe. The web team sees more schools and units choosing Drupal and Acquia largely based on the success of early adopters. Acquia’s tools and services, combined with its open CMS, has empowered UVA’s web team to create hundreds of sites and focus on actively building Acquia Site Factory profiles for its next level of scale as the University retires legacy web servers housing thousands of sites. In the project’s next phase, Site Factory will go into production late this year with a push to reach 600 sites next year.