Serving millions of residents, visitors and businesses, the City of LA’s Information Technology Agency (ITA) realized that their website platforms were hindering, not helping them.

Since 2015, the City has launched 68 Drupal websites hosted on Acquia Cloud, which has increased time-to-launch and site stability. This has allowed developers to focus on developing more features for the websites, which has in turn increased user satisfaction and user engagement.

With nearly 4 million residents, the City of Los Angeles is the largest city in California and the second largest in the United States. Through its official website, lacity.org, the City provides information and services for residents, visitors and businesses.

The City of LA’s Information Technology Agency (ITA) employs 465 Information Technology professionals organized into 19 divisions with an annual operating budget of $125 million. ITA staff are responsible for providing classic IT services, such as computer support and data networking, and progressive digital services, including the 3-1-1 call center, enterprise social media and more.

The mission of the City of LA’s ITA is to provide “responsive, responsible and excellent tech” across the municipality but, after careful analysis, ITA determined that their website platforms were preventing them from reaching these goals. Maintaining the city’s static HTML websites and content management system (CMS) proved to be difficult and time-consuming for IT staff to maintain and for end users to update.

ITA staffers faced a number of challenges with maintaining websites, especially in the areas of site stability and client satisfaction. City websites that were hosted on local servers were prone to crashing in high-traffic, heavy-stress situations and backups were expensive to maintain. Additionally, developers were struggling with juggling feature updates and security updates with website content updates, frustrating users. Since developers were overwhelmed with maintenance tasks, they had little time for design, making it difficult to adapt sites to changing design standards.

In 2015, the City of Los Angeles worked with Acquia to migrate three of its websites to the Drupal content management system (CMS) and hosted on the Acquia Cloud.

Having worked with Drupal on a small number of sites since then, the City of LA continued its digital transformation with Acquia Site Factory. Acquia Site Factory allowed the ITA team to deploy websites in minutes; Drupal’s easy-to-use CMS along with ITA’s flexible templates have empowered non-technical staffers in other departments to make their own site updates and IT staff no longer have to worry about stability issues; Acquia’s platform has served the City’s sites through earthquakes, fires and pandemics. 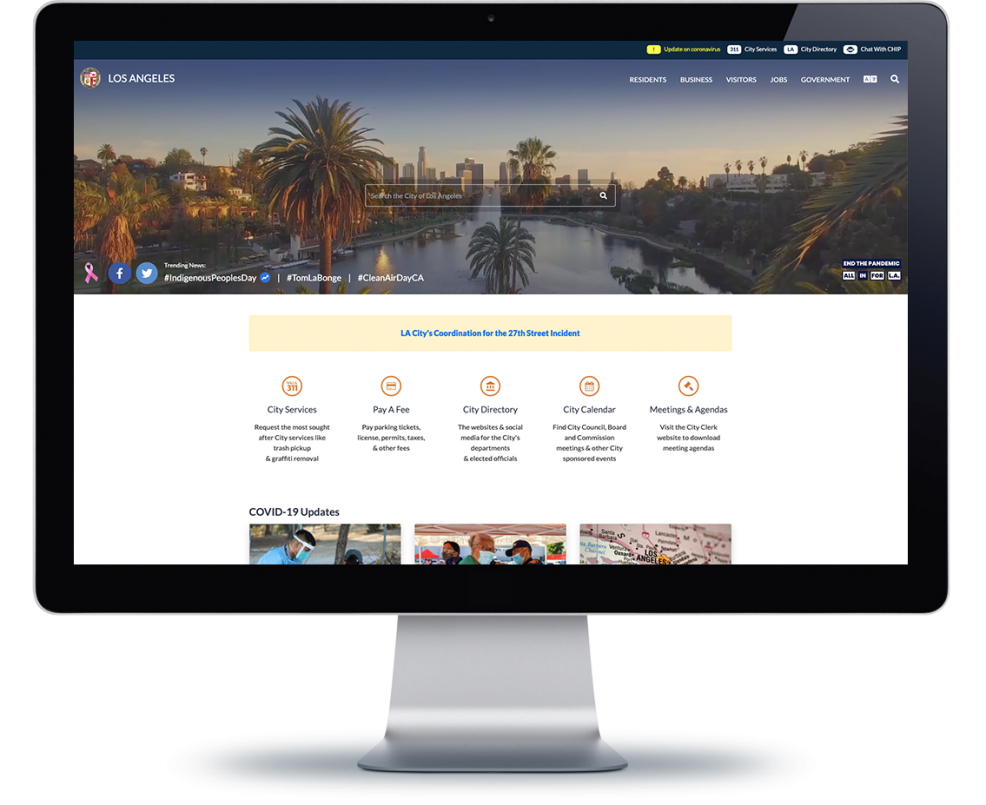 This has allowed the ITA’s developers to focus on higher-value tasks like building new features and functionality for their websites. From building their own custom code in Drupal and tapping into the vast number of open source code from the Drupal community, the ITA’s web teams have been able to deploy new features for their websites quicker than ever before. For example, by utilizing APIs and leaning on Drupal’s API engine, the City’s website can show residents who are requesting City services data from the City’s 3-1-1 call center data, showing how many times the City has assisted on other calls in their neighborhood. The website can also feed news and calendared events to other websites easily through its own API.

ITA has also enhanced site personalization. For example, when a site visitor enters their address, the site delivers neighborhood-specific information, like contact info for their councilperson, parks data that shows local recreational spots and more — without requiring the visitor to gather the information from a variety of different websites.

Drupal’s CMS has proven to be a popular tool for end-users to update their websites and Acquia has provided a powerful and efficient way to deploy them. The City of LA began with 3 Drupal website launches in 2015 and they were received so well that they have launched 68 Drupal websites since — all mobile-responsive and ADA-compliant. Traffic and engagement time have increased across the City’s sites and the sites have received national awards from CIO Magazine and the Public Technology Institute, among others. Drupal’s APIs have also allowed the team to share data from the website into other channels like chatbots and smart speaker apps. Staff job satisfaction has also increased.

Building on these successes, the ITA’s future plans include further investments in user experience and introducing more refined user personalization through an “Angeleno Account,” which will allow residents access to multiple City websites and apps with a single profile and login. Once again, Drupal will help make these integrations easier.

Migrating to the Drupal platform has finally allowed ITA’s web team to achieve its goal of providing “responsive, responsible and excellent tech” to its end users and constituents.