The Women of the Drupal Community: aburke626

This series showcases women's contributions to the open source Drupal community. In this installment, we focus on Alanna Burke
Posted by Gigi Anderson on 04/27/2018

Previously in the Women of Drupal series, Elli Ludwigson (ekl1773) shared how her experience as a librarian prepared her for Drupal development, why community mentoring is important, and more. Catch up and read Elli’s story, here.

After arriving in Nashville for my first DrupalCon, I was in search of sessions that offered insight and advice into what it means to be a Drupal community member. After pouring over numerous tracks, presentations, and schedules, a session on Women in the Tech Workplace seemed like a good place to start.

After settling into my seat, Alanna Burke (aka aburke626) took the stage to present her session on Women in the Tech Workplace. She kicked off her presentation by introducing three of her guinea pigs, Hedy, Ada, and Jean; all named after iconic women in the computer science field. 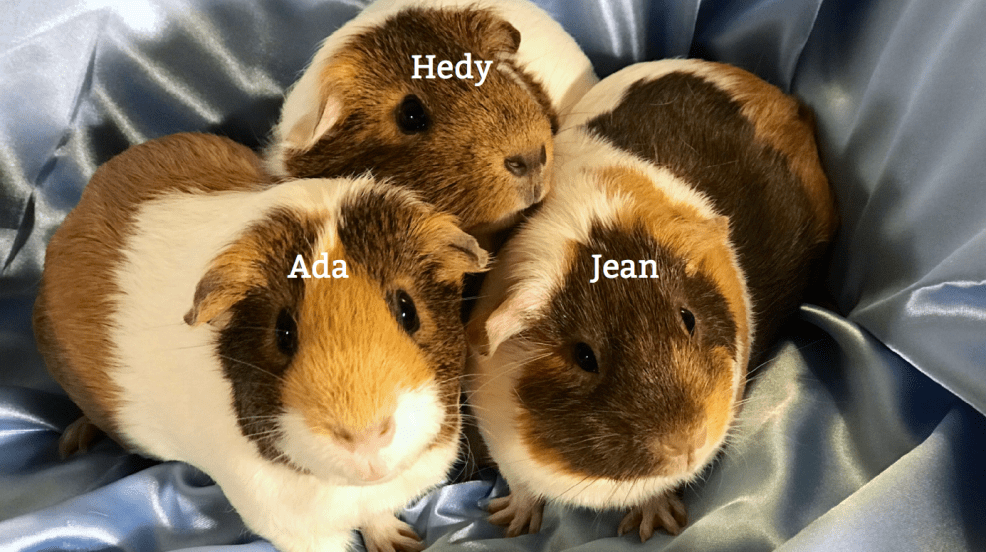 When she’s not dismantling the myth behind the “pipeline problem”, Alanna works as a developer at Chromatic, a fully-distributed Drupal development shop. She’s also on the leadership team for the Drupal Diversity & Inclusion working group.

Following Alanna’s presentation, I sat down with her to learn more about her career in tech, the importance of diversity and inclusion in Drupal, and what Drupalists really look like.

Gigi: How did you get your start in tech?

Alanna: In high school, my introduction to tech included building GeoCities [laughter]. Then in college, I took an introductory computers and applications class. The course was taught by a really passionate female professor, who told me “You should major in Computer Science.” I had already been wanting to change my major. I was a theatre major at the time. My professor helped to show me that computer science was what I wanted to do, so I changed my major to Information Science and Technology. There were not a lot of women who majored in computer sciences, but the ones that did were running the place. We had an Association for Computing Machinery (ACM) chapter, and by the time I graduated, all of the officers were women. I went from being the secretary to the vice president, and then president.

Gigi: How did you first get into Drupal?

Alanna: I was working at Temple University where I had a really boring title, like Technician II or something like that. I managed the computer labs, but I was also the Webmaster. They needed a new website, and I had been doing WordPress development for friends and freelance clients. I knew about Drupal, and kept thinking, “Wow, I think this would be a good solution for me to learn Drupal, and I think that this could be a really powerful tool”. The project had such a tight timeline though, that I thought, “I’m never going to be able to learn Drupal in such short notice”. One thing I had heard about Drupal is that there is a steep learning curve. I ended up building the website in WordPress, but I kept thinking, “I want to learn Drupal”. Eventually, I started looking for Drupal developer jobs.

I ended up finding the perfect job at another university, which was just getting starting redesigning its website in Drupal. An outside agency was leading development, so the university was supportive of getting a developer to learn Drupal with them. It wound up being the most perfect job for me. I learned Drupal with them as we got the website handed off.

Gigi: How was the Drupal learning curve initially?

Alanna: It was about what I expected. I ended up getting really in-depth with Drupal really quickly, which I think is the best way to learn. By the time I left that job, I was really a much more advanced Drupal developer, which lead me to Chromatic.

Gigi: What Drupal project or contribution are you working on and/or most proud of?

Alanna: I’ve been really excited about Diversity and Inclusion, and the work we are doing at DrupalCon Nashville. We just launched a new website to provide people with a platform to find and share D&I resources. I’m sure it will grow overtime, but the initial launch offers a taxonomy-based fitler. Hopefully this will be a good resource for people.

Gigi: When you started getting involved with Drupal, how did you find out about the Diversity and Inclusion initiative?

Alanna: I think it was the beginning of last year, actually. I was in the Women in Drupal channel and somebody put out a call like, “Hey, we’re having this Diversity and Inclusion meeting in our Slack channel.” So I joined the channel, and found out that they were planning stuff for DrupalCon Baltimore. That’s when I had the idea for a photobooth - I thought it would be be cool to take pictures of everybody and be like, “Hey, this is what a Drupalist looks like.” We wound up with this really cool wall of photos. I’ve always been passionate about getting women into tech. I’ve always been involved in that and this was just an extension of that. I found this amazing group of people who are now some of my closest friends. I’m on a leadership team. I just love it. I can’t imagine not being involved in it.

Alanna: I talked about it my session yesterday, but one of the first challenges for women is that there are just not enough of us here. I get tired of being one of the few women in the room or being assumed that I’m not technical. I’ve been at a party and someone asks, “Oh, what do you do?” It’s like, “I’m a developer, because this is a development conference and you should assume that I’m a developer. Because, guess what, if I was the marketing girl, I wouldn’t get offended if you assume that I was the developer.” Would you get offended if someone assumed you were a developer?

Alanna: Yes, [Laughter], I get offended if someone assumes I’m not technical. I also think there are more women who are using Drupal that aren’t coming to physical Drupal spaces for one reason or another - whether it’s just fear that it’s a bunch of nerdy guys or they don’t know that it’s safe or they don’t think that it’s fun. I think just anything we can do to get more women in the room.

Gigi: Will you tell me a little bit more about the ‘What a Drupalist Looks Like” project? The inspiration for it, and how it turned out on site?

Alanna: Have you been to our booth?

Alanna: Okay, you have to stop by. We just tell people what we are doing, and then we take their picture, and print it out on a little polaroid printer and them them up. I just thought that it would be a fun thing to show the diversity of the Drupal community. People will ask questions like, “What if we got a whole wall of white guys?” Well, that’s important to show, too. That also shows a really important truth about Drupal. But when we started the project, we ended up having old guys and young guys, and this and that. We had people come with service dogs and babies and - I thought it did what we wanted it to do. It’s even more popular this year. I just think it’s a really cool thing.

Gigi: What advice would you give your younger self or someone who is just starting out?

Alanna: Now that I know that we have this Diversity & Inclusion group and that we have Women in Drupal initiatives, I would definitely point her right there to say, “Hey look, we have this really welcoming community. You don’t have to feel like you are some sort of outsider.” We have this group that is working to change that, and make that better so that they could feel more comfortable in the community off the bat. No matter what their local community or their job may look like, the Diversity and Inclusion group wants to help them feel a little more comfortable and welcome.

For more information on Alanna’s DrupalCon Nashville session, Women in the Tech Workplace, you can watch the presentation recording or download Alanna’s slides.