The secrets to better marketing are out! We kick off our CMO Secrets series with experienced marketing leader and G20 Ventures Partner, Mike Troiano.
Posted by Dave Bor on 01/08/2020
Image

Welcome to our new blog series, CMO Secrets. This series will feature genuine insights and advice from today’s exceptional marketing leaders. Some names will be easily recognized and others may be new to you, but every single one will have been hand-picked for their experience and knowledge in the world of startups, technology and marketing. No pretense, jargon or PR spin here. We asked our most burning marketing questions, and they answered. Get their unfiltered thoughts and opinions and find out how these gurus rockstars marketers got to where they are today.

(Note: This content was previously published on Mautic.com in April 2018 and has been updated for accuracy.)

Helping us kick off our inaugural CMO Secrets post is a man who needs no introduction, but he’ll get one anyway because it would be weird to not have one.

Today, we welcome Mike Troiano of G20 Ventures. Mike is a venture capitalist who brings nearly 25 years of executive leadership and marketing experience to bear for entrepreneurs. He most recently served as the Chief Marketing Officer of Actifio, a global enterprise data-as-a-service provider he helped turn from an obscure virtualization technology into a venture capital “unicorn” valued at over $1.2 Billion. As CMO from 2012 to 2017, Mike helped grow revenue over 80% per year, creating the Copy Data Virtualization category while expanding the business into blue-chip accounts across 37 countries.

He spent his early career at top worldwide ad agencies including McCann-Erickson and FCB and was named the founding CEO of Ogilvy & Mather Interactive in 1995. He later served as the president of NASDAQ-listed systems integrator Primix, and as General Manager of mobile content pioneer m-Qube from inception through one of the largest Boston-based venture capital exits of 2006.

Mike is a graduate of Cornell and the Harvard Business School, a TechStars mentor, a Board Member of the New England Venture Capital Association and a strategic advisor to Actifio. He is ranked in the top 1% of the most influential people on Twitter and among the most popular writers on venture capital and entrepreneurship on Medium, and hosts the popular Boston startup community podcast How Hard Can It Be? 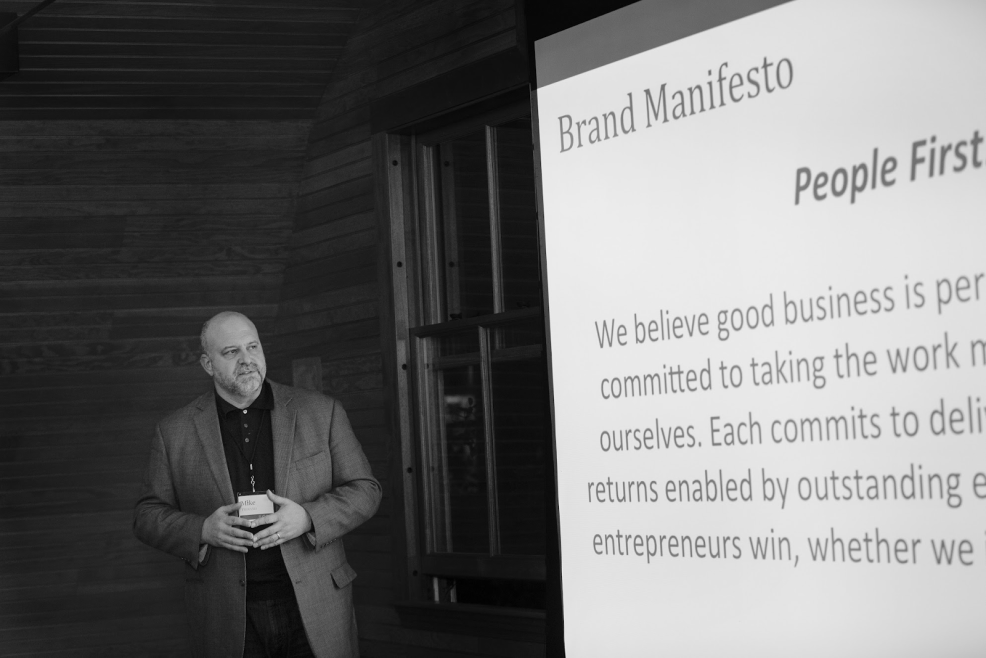 Tell us about G20 Ventures, and why you were excited to join them.

G20 Ventures provides early traction capital to East Coast enterprise technology startups, backed by the power and expertise of 20 of the Northeast’s most accomplished entrepreneurs. I’m here because I like that stage – which tends to come after the rapid cycling iteration that characterizes the earlier seed-stage – and because I buy into the whole philosophy of the firm… that venture is an inherently human-scale business, demanding geographic focus and a network of trusted relationships with people who’ve done it before. We call this philosophy “People First,” and it really defines who we are. Beyond that, being a partner in a venture firm is a lot like being an agency principal, just with a better lifestyle and business model.

At an agency, your focus is really on the quality of the work. The culture of the world’s best agencies, several of which I’m proud to have been a part of, are a kind of creative cult. Running one is about winning and keeping clients, which of course connects indirectly to getting results, but the day-to-day energy of an agency is all about the quality of the ideas and deliverables agencies produce and deliver through media. A good B2B CMO, in contrast, is all about results. Your value is a function of your ability to create leverage in sales, specifically to enhance the revenue productivity of sales and marketing spend. Somebody did tell me about this, actually, and I wrote a post about it at the time.

You’re widely acknowledged to be a great storytelling marketing leader. Any rules or best practices that you think deserve to be ignored or broken in order to discover and tell a brand’s story?

Don’t worry too much about consensus in the beginning. Fact is you can’t really write a great story by committee. While it’s important to build support for whatever story is going to act as the foundation of your positioning and brand identity, you need to focus first on formulating that story yourself, after listing carefully to the thoughts and opinions of everyone who has a stake in it. Create something powerful, validate it with the only audience that really matters – customers – and then lead the team by selling it in, across the organization, day in and day out.

What are 1 or 2 parts/responsibilities of the marketing job that you miss the most? And 1-2 that you don’t miss?

I miss being able to drill down and follow up on executional details, working in a team of smart, creative people to make things happen on the ground, and getting the satisfaction of doing so well. VC life is a little lonely, to be honest, in comparison to running a marketing team day today. On a bad day, it feels long on strategy and ideas and light on execution and action. That said, I don’t miss the constant sense of being underneath a deliverable. When I have to write or produce something it tends to occupy all the white space in my life, and living like that just takes its toll over time.

What does being “authentic” mean to you, and what advice do you have to marketers trying to find that unique, authentic voice for their brands?

It means communicating with people as though they were actual human beings, instead of a “target consumer” or whatever. We seem to default to a kind of Official Marketing Bullshit mode (OMB for short) that we think sounds impressive but actually telegraphs overly packaged half-truth. I tell my own people to read what they write out loud. If they feel like an asshole saying it, then for God’s sake don’t write that way and send it out to our 5,000 person email list.

What advice do you have for B2B marketing execs re: the best way to “keep score” (or measure success) of their marketing efforts?

The purpose of B2B marketing is to enhance sales productivity, period. Everything you do in marketing – from building brand to demand generation to collateral, PR, events, inbound and all the rest – has to be about driving more sales over the long run. Once you get that, measuring impact is simple. Just create a ratio of Revenue (or Bookings) divided by Sales & Marketing Expense. Look at that by quarter going back, and plan it going forward. If your marketing is working, that ratio should grow. If it’s not, you’re probably better off spending the money you were spending on marketing on adding another salesperson.

In your role as a Partner at G20, are there similar traits or behaviors that you look for in entrepreneurs and/or management teams?

It varies by project. The most important thing to me is an intimate, personal understanding of the problem they’re trying to solve. Have they walked in the shoes of the people they’re trying to sell to? Or do they just know what they’ve read? The closer they are to the problem, the better. Next, I look for a match between the two or three most important vectors of execution for the business, and the skillset and experience represented in the team. Is there a match? If not… what’s the plan to close the gaps? Finally comes the broad stuff, the things you want on every deal. Are they someone I want to work hard with, through good times and bad? Are they good people? Are they worthy of the team’s loyalty, and able to get people to follow? All those things are important.

What’s the most impactful change you think we’ll see in digital marketing in the next 5 years?

The shift away from email and toward messaging as the primary means of business communication. The generational impact of this is monumental, as any parent who’s tried to communicate with their children via email will attest to.

The network of relationships and repository of goodwill I’ve amassed over 30 years of trying hard. In the end, businesses (and money) come and go. It’s the relationships that endure, and those are the things I most value.

What’s one (true) thing readers would be surprised to read about you?

There are few things I enjoy more than binge-watching dark, Nordic crime dramas. Fortitude, Trapped, Hinterland, Lava Field… It’s like an obsession, I may have some serious issues.

We talk a lot about open marketing: to us, there are very real and meaningful differences between open and closed systems/platforms, as well as open vs. closed approaches or philosophies to marketing and business in general. What does the idea of open marketing mean to you?

Everywhere I look as an investor, I see a world moving away from closed, centralized systems toward a world of open, de-centralized ones. That’s the core of the cryptocurrency/blockchain revolution in a nutshell… A generation of people made cynical and untrusting of the national government and fiat currency, looking for ways to take back control of their own commerce. I see it in the Equifax debacle, the shifting demands on the electrical grid, the troubles Facebook is having, the data land-grab that’s powered by emergent AI and ML algorithms, even in the metal printing/additive manufacturing model that’s moving industry away from the brute force creation of hard goods in giant factories toward the sweet hum of steel boxes on desktops close to where parts are actually required. It’s as though – having let the glorious potential of the democratic, decentralized Internet slip through our fingers in favor of a digital world controlled by 4 companies – we are suddenly woke. People are tired of having their behavior optimized for the benefit of somebody else’s franchise. I am 100% convinced the future belongs to open, decentralized systems that liberate us from the tyranny of vendor lock-in, at every level, and empower us to scale our own businesses more powerfully and simply than ever before.

The Data is In: Are CMOs Out?

Open Marketing: What Every Modern Marketer Needs To Know