Clickbait: How to Lose Your Audience's Trust

There are some content trends that marketers continue to follow like lemmings to the sea. One of them is clickbait.
Posted by Reena Leone on 05/19/2016
Image

However, while staying on top of trends is generally a good idea, not every trend should be followed.

The definition of clickbait makes it sound innocent enough and as a writer, I get it. Writing good articles with catchy headlines that entice someone to read is kind of an artform. It’s a balancing act between communicating what your article is about, and using the right keywords to make the reader feel compelled to click.

The competition for ever-shorter attention spans continues to grow, making this progressively harder. But the answer isn’t to throwing a “You’ll Never Guess…” in front of whatever your subject is. That’s just plain lazy.

What’s even lazier is letting a third-party populate the bottom of your website with irrelevant, clickbait-y content. You know that I’m talking about; the misleadingly titled “related links” section, often sites and sources you’ve never heard of, served up by clickbait factories like Outbrain or TK.

The recipe is simple: use a picture of a celebrity or something risque, be salacious, promise a fixed number of things -- “10 Celebrity Plastic Surgery Disasters” is a classic -- and you get the picture.

These pretty much never have anything to do with the article they are attached to and often the same ones appear on multiple news sites. 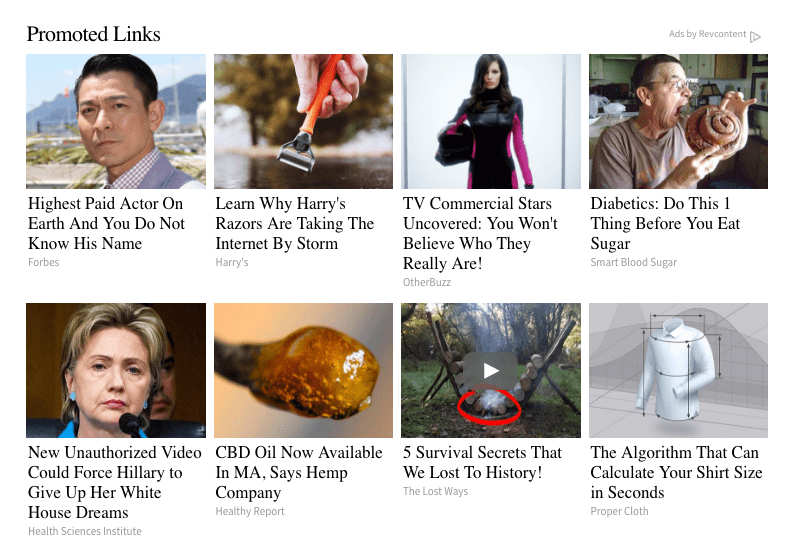 Another example is what I’ll call email subject line trickery. In lieu of the “You Won’t Believe…”, clickbaiters will use something more person like “RE: Your Vacation Plans” to get you to open their email. Ask yourself: Are you sure you should be using tactics usually reserved for spammers and scammers?

I might be getting a little too personal here, but I find clickbait to not just be lazy but insulting. Whenever I see a “You Won’t Believe…” or “You’ll Never Guess…” I feel like I’m being talked down to by the author because chances are, yes I can.

I can almost guarantee whatever revelation your article has uncovered, I can wrap my head around. It shows very little confidence in your audience.

The morning after episode two of Game of Thrones, season six aired, every media and entertainment site couldn’t wait to talk about the big reveal. Jon Snow lives! I never doubted it for a second. Now I understand that there was a lot of competition for eyeballs, especially with such a popular show. But if you pair a “You’ll Never Guess What Happened Last Night on Game of Thrones!” with a picture of Jon Snow, you’re treating me, your reader, like I’m an idiot.

Anyone who is a fan of the show can surely grasp Jon Snow, subject of one of the biggest GoT fan theories, coming back to life (in the exact way pretty much everyone predicted he would, no less). In a show that has dragons and direwolves, where main characters can be brutally offed without warning, there’s not much fans of the show wouldn’t believe at this point.

Instead of trying to lure them into an article, why not give it to them straight: Jon Snow’s Fate Revealed on Last Night’s Game of Thrones. There’s a headline free of both trickery and spoilers.

It’s happened to all of us. You click on an article that piques your interest only to find out it pretty much has nothing to do with the headline. Or the headline makes an article sound much more exciting than it actually is. It’s disappointing.

On the flipside, if you’re a writer, you’ve probably put out at least one piece that could be considered clickbait. A classic example is trying work in a trending topic that has nothing to do with your business; Why Moving from Drupal 7 to Drupal 8 is like Tom Hiddleston Replacing Daniel Craig as James Bond. Sure, it’s saying that both things are an upgrade (well, the latter is more of personal preference), but what do the latest Bond casting rumors have to do with building open source digital experiences?

“Click-bait is rarely newsworthy, but it does attract eyeballs. The assumption seems to be that audiences might stay for the ‘serious’ content after gorging on the fluff,” said Jeffrey Dvorkin, former managing editor and chief journalist at CBC Radio in his PBS.org column on the subject. He goes on to say that in reality, the public resents clickbait headlines for wasting their time. Clickbait is becoming so loathed that there is a movement called “bait shaming” where bloggers rip apart the worst offenders. For example, SavedYouAClick, whose (slightly NSFW) Twitter account provides the public service of “saving you from clickbait and adding context.” 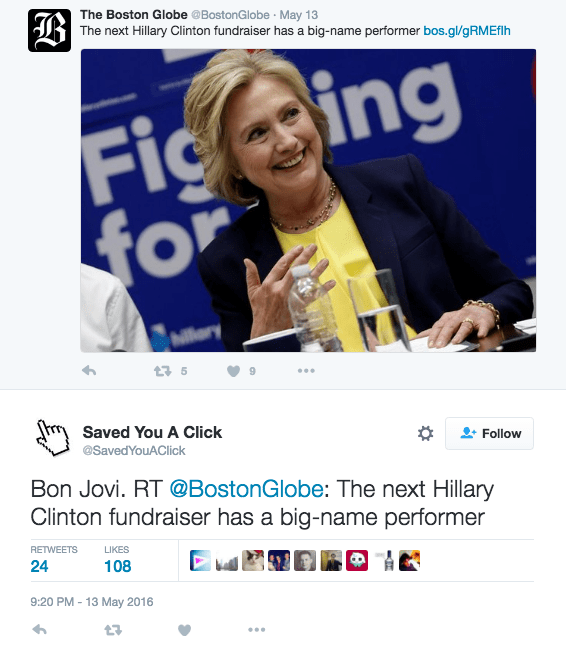 As the saying goes, fool me once, shame on you. Fool me twice, shame on me. If a publication starts using clickbait, their audience starts to distrust them. If they lose trust, they stop visiting their site.

On a more practical security note, clickbait is now being used in malware attacks and phishing scams. This has been especially prevalent on Facebook. As social media security firm ZeroFOX explains, “For the cyber scammer, Facebook offers a couple of huge benefits. The first is virality: if enough people click a malicious link, perhaps one that hijacks your account and reposts itself, the Facebook scam can self-propagate ad nauseum with zero maintenance.” These cyber scammers often use clickbait to entice you. If you’re a legitimate news source, do you want to run the risk of being associated with cyber scammers?

The Internet is vast and there is plenty of room for silliness. There are scores of articles out there that are meant to be lighthearted and funny and not focused on keyword optimization or driving sales leads. However, if your content is tied to specific goals -- audience growth, traffic, revenue, leads, etc. -- then using clickbait is actually a missed opportunity.

It’s a missed opportunity to show your audience respect and deliver quality content that meets or exceeds their expectations. Sure, it works for a while, or else no one would use it. But once your audience catches on, that’s the end of it.

In the end, it’s easy to believe, and you’ve probably guessed, it’s just not worth it.